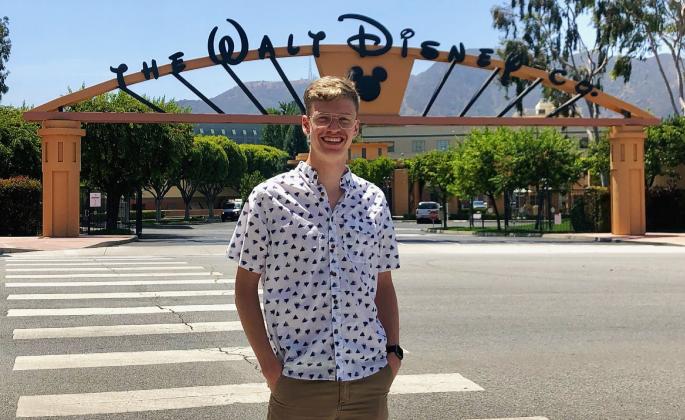 Marvel Studios, home of the Avenger films as well as hit TV series such as WandaVision and Loki, has become one of the hottest entertainment creators in Hollywood. Now three SSU Communication and Media Studies grads are part of that high-powered universe.

Ryan Harvey, Class of ’20 and former GM for the student video production outlet Studio Blue, was just hired as a post-production assistant in the Stereoscopic Department. That’s the department responsible for, among other things, converting films to 3-D for cinematic release.

“The most exciting thing for me about this position is getting the experience under my belt and having the opportunity to learn from such well-established professionals,” said Harvey. “I’m extremely thankful and fortunate to be starting my journey into the world of studio production with a company as well-known as Marvel. Being able to say I played some small role in something enjoyed by millions worldwide is a dream come true.”

But Harvey’s path to Marvel wasn’t paved with talent alone. Just this past year, he took part in a Studio Blue virtual alumni panel discussion that featured another former GM, Anna Luna (’16). At the time, Luna worked for Netflix. She reached out to Harvey right after the panel and offered to stay in touch with him if he ever wanted to make the move to Los Angeles.

She also put him in touch with her friend and fellow class of ’16 Coms grad, Kayley Kemp. Kemp has been a post-production coordinator with Marvel Studios for the past three and a half years. She set up a Zoom meeting with Harvey.

“Ryan then sent his resume over and I gave him a few tips on what hiring recruiters are looking for in resumes,” said Kemp. “I then sent it off to a team I heard was hiring. A couple weeks later Ryan texted, and said he got an interview, so I gave him a little more advice on the interview process. The team ended up really liking him and hiring!”

“I was able to get this position thanks entirely to connections I made through Studio Blue,” said Harvey. “The value of networking really can’t be understated when it comes to media-related work. I’ve met so many amazing people through the Communications Department at Sonoma, and all of them have been more than willing to help a fellow Seawolf.”

Both Kemp and Luna say they were delighted to help Harvey.

“I’ve enjoyed being able to offer advice and support to my fellow Sonoma grads who are passionate about the film and entertainment industry. I love connecting people and helping others build a network. I’ve learned the importance of networking and how that really helps shape opportunities for yourself in this business,” said Luna.

Now Luna has used her own networking contacts (from previous production assistant work on the films Blank Panther and Spiderman) to also land a job at Marvel: executive assistant to Victoria Alonso, one of Marvel’s main executive producers.

Communication and Media Studies Professor Ed Beebout, who worked closely with Harvey, Luna and Kemp in his role as Studio Blue adviser said he’s impressed with both their talents and positive attitudes.

“I was already proud of Anna, Kayley and Ryan. They were talented, passionate and hard-working students. But to see Anna and Kayley go the extra mile for a fellow alum really touched my heart,” he said.

Dr. Hollis Robbins, Dean of Arts and Humanities at SSU, said she’s excited to watch the progress of film and video production students in Coms.

“The wealth of talent that Sonoma State’s media and film programs have launched is truly impressive,” she said. “Our alumni are going to create great cinema!”